The Orbs are amazing creations. They almost seem perfectly designed, nearly flawless, and yet their origins are a complete and total mystery. Little more than hovering, metallic spheres, they possess extremely frighteningly powerful weaponry, yet they do not seem too eager to utilize it. At the same time, they do not appear pacifistic, and talking to them can very easily become a chore.

Yet, despite their seemingly-perfect nature, they are not often witnessed, as only a limited number of them ever exist at any given time.

The inner workings of an Orb is hidden away by a spherical, metallic shell known as the "skin" by many other races. The metal used in this skin is a specialized type of Urethian Alloy, which is highly durable and resistant to most energy blasts and physical punishment. However, while the Orbs have been known to insist that their calculations indicate that they can survive traveling through the event horizon of a black hole, this is seen as extremely unlikely. A popular joke about this very subject ends with, "Looks like he forgot to carry the 1".

The Orbs are capable of an action they refer to as compiling. This allows multiple Orbs to "combine" into an single, larger Orb. The larger Orb shares the thoughts and personalities of all Orbs who have compiled into it, yet in terms of what sets the factories off, it is considered a solitary unit, with the "deaths" of all other members. In Orb culture, larger Orbs seem to be regarded somewhat more highly, and their weapon systems are respected greatly. Compiled Orbs are used as the typical weapon systems in any and all Orb weaponry, such as in starships, vehicles, and building defenses. Compiled Orbs are physically identical to Uncompiled Orbs, only they are bigger, dependent on the number of Orbs who have compiled into it.

The Apex Bomber is the Orbs' best known starship, and it seems likely to also be their capital ships. It is actually capable of igniting supernovas through the use of "bombs", and yet they are never utilized...of course, this is considered a good thing amongst much of the galaxy's inhabitants.

While no one knows who, if anyone, created the Orbs, it is known that it was one of the ancient dawn races, which includes the Centro, Azghora, and the Mnemosyne; however, none of these races seem to have been the creators of the spherical beings. The Orbs themselves do not seem very eager to reveal their creators, and speak of them only cryptically.

"The Orbs are mysterious sapient machine created by a long-forgotten progenitor race. A very specific number exist in the universe, and should one die or several "compile" into one unit, that many will be produced at one of their arks. 3rd grade creation."

"Extremely rare, some Orbs have in fact become corrupted through unknown means. Unlike their contemporaries, Corrupted Orbs are more than willing to utilize their extremely deadly weaponry, killing things on sight as it pleases them."

"While an orb can compile an indefinite number of times, growing in size, power and intellect each merging, they rarely go beyond the merging of a few. This size is the main compilation size seen, although it is far from the biggest."

"Corruption does not mean an Orb can no longer compile with others into one unit; however, since Orb corruption is rare most Compiled Corruptions got that way by forcing uncorrupted Orbs to merge their processors with them."

"Orbs rarely commit to war. When they do, oftentimes numerous Orbs will merge into a size large enough to fit into open slots on their main warships, known as Apex Bombers. This is one of those Orbs, utilized for vast destruction to their enemies."

"Doom Apexes are one of the rarest "breed" of Orb. They are massive, having converted uncountable numbers of Orbs into their being. They counter the Apex Compilation in power, but far exceed them in utter ruthlessness." 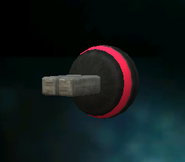 A Doom Apex
Add a photo to this gallery
Retrieved from "https://extraterrestrialfanon.fandom.com/wiki/Orb?oldid=8297"
Community content is available under CC-BY-SA unless otherwise noted.