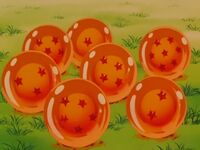 The Dragon Ball Heritage Project is a project that has been worked on by Somarinoa that entails trying to determine what characters belong to what races. As this is Somarinoa's project, several races which do not naturally have names are named by Somarinoa himself. Somarinoa's fan characters are also listed here, though they should be obvious which ones they are. Because of the sheer number of characters that would fit into it (and the easiness of knowing who they all are), Humans likely will not be included here.

The Androids were primarily machines built to look humanoid. However, other models such as cyborgs and bio-organic androids are also considered pure "Androids" as part of a wastebasket term, albeit technically incorrect.

The Bas are a species indigenous to Bas, classed together by fat, frog-like bodies and four (or five, in the case of at least one individual) eyes.

Unnamed member of the Time Breakers

The Bio-Androids are a species of biomechanical lifeforms created using the DNA of Humans, Saiyans, Namekians, and Ice Demons. They possess abilities and traits related to these four species. Cell was the first of the species but his children were all killed; the species didn't properly propagate until Cell-X spawned youth.

Brenchians are a species indigenous to Brench AKA Koola No. 98, classed together by brightly colored skin (only blue and red have been seen thus far) and lighter colored hair (white, blond, light blue and golden have so far been shown). Accent appear to vary from an English/Australian accent to a French accent, indicating a likelihood for different dialects.

More commonly known as Glaeris (Malaysian Dub), Frieza Clansmen, Changelings, Icejins or Arcosians (the last one being a theory that they were the race the Saiyans first met), this race is classed together by their reptilian appearance, purple blood and for their ability to transform into multiple forms. It is also known that they can survive without atmosphere or pressurization in space and should they be eliminated they tend to have their bodies thrown back together via cybernetic upgrades. Each and every existent Celcian's name is also a pun on cold. So far, 7—9 Celcians have been revealed (dependent upon whether the 2 Frozes are actually the same character or not, which is likely that they are not with the Berserker simply isn't officially named yet, and whether Jiora is truly a member of the species or not), though the canonicity of most is debatable.

Demons are a highly variant group of species collectively associated to one another through their chaotic and highly aggressive personalities, and the fact that most demons are bulky with gray, green or blue skin, and possess 3 toes on each foot. Though most live in the Demon World and are ruled over by the Makaioshin (specifically, Dabura), not all can be found here.

"Froots" is the name given on this wiki to Appule's species, a race of bipedal cephalopods. They were named thusly due to Appule's and Orlen's name referring to fruits, and the fact that there is not an official fruit-named species, despite their existing a vegetable-named species. They are classed together by their elongated, cephalopod-like heads and lipless mouths. Their skintone can vary wildly (with purple being by far the most common color and orange being second most common), as can their eye color and length of their bicuspid teeth. They also completely lack anything even remotely analogous to ears, and are assumed to possess tympanic membranes of some sort, like frogs; however, at least one individual was known to possess horns. Spots or speckles are also very common. They appear to have gills on the sides of their elongated heads, which may allow them to breathe underwater.

Human Cyborgs are humans who have mechanical parts grafted on. They are no different genetically-speaking from regular Humans but are given their own section here to show the differentiation between true Androids which are 100% mechanical and the few Androids who were known to have been converted from living beings, which in-universe are typically still referred to as "Androids", though that would be a misnomer.

Kabochans are a species indigenous to Kabocha, classed together by their lack of eyebrows and their hairstyles (assumed to be a cultural style: shaved sides of the head with a "crop" of hair on top—hair on the back of the head may be optional). Their race was defeated by Turles, but since Turles hates Frieza it is not out of the question that it had been under Frieza's rule before Turles' arrival.

The Neko Majins are a critically endangered species indigenous to Earth, classed together by bipedal, feline bodies. Many - though not all - Neko Majins also have heavyset, round bodies, and slanted eyes. Their ears come in a variety of shapes, though most are either long and antenna-like or like rabbit ears; more cat-like ears do exist, however. They are a mischievous lot. It has been stated that there are only ever 28 of their kind at a time, though they may in actuality be immortal. A number of characters have retroactively been added to the Neko Majin race in this project for sharing various traits with the species, which differs from the rest of the cats seen in the series.

This list considers the Senbyō (the Immortal Cats) to be members of the Neko Majin.

Saiyans are classed together by having a Human-like body, spiky black hair (brown hair is a rarity), brown eyes and a brown-furred tail that is used to absorb blutz waves to transform a Saiyan into its Oozaru form; while this tail may be removed, it can regenerate during times of stress unless it is permanently removed, presumably through surgery. Saiyans live a lifespan similar to Humans yet appear to age slowly until very late into their lifespan. Their species undergo numerous transformations that tend to affect their personality on some level along with their stats. Every 1,000 years a special Saiyan is born as well, who possesses similar appearances yet with variant hair coloration.

Saiyan descendants who have one parent that is Saiyan and one who is of another race. Only Saiyan/Human hybrids have officially been shown.

Saiyan descendants who have one parent that is 1/2 Saiyan and one who is of another race. Only Saiyan/Human hybrids have officially been shown.

Saiyan descendants who have one parent that is 1/8 Saiyan and one who is of another race. Only Saiyan/Human hybrids have officially been shown.

Saiyan descendants who have one parent that is 1/16 Saiyan and one who is of another race. Only Saiyan/Human hybrids have officially been shown.

Saiyan fusions are performed in two manners—first, through the use of a Metamoran technique, which gives them djinn-like clothing and can be kept for a maximum of 30 minutes total at normal Saiyan form and/or any Super Saiyan level with the exception of Super Saiyan 4 (which only allows for a 10 minute fusion); the second involves the Potara Earrings, which is a permanent fusion except in cases where they are ripped apart, such as through digestion.