The Cryokkan are somewhat Xenomorph-like ice creatures with frosted-over blue exoskeletons. Most of their body is composed of many, many butterfly-like scales layered overtop each other in a scalemail-like manner, resulting in a very smooth icy blue body. Certain parts of their bodies are solid carapace, and are a lighter blue than the rest. They have six limbs, with two usable pairs and a third pair on the front of its body, which is nearing vestigial status but is still usable. They can shift between a psuedo-bipedal and a quadrupedal stance; they normally only stand on their hind legs when angered.

They are somewhat feared creatures that are capable of infusing any creature in the universe with their own icy blood, which, when subjected to freezing temperatures, rapidly consumes the bloodstream and transforms the victim into a part-Cryokkan oddity. They typically retain their personality when this happens. Depending on the host, this can do anything from simply change small parts of the appearance to create a grotesque hybrid. Humans are the most resistant to this and typically retain a near-entirely human body. 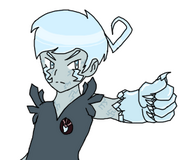 Frosta Dellavin, a human-base Cryokkan oddity. [Belongs to my friend Logan]
Add a photo to this gallery
Retrieved from "https://extraterrestrialfanon.fandom.com/wiki/Cryokkan?oldid=9759"
Community content is available under CC-BY-SA unless otherwise noted.